Hormonal birth control works by effecting the secretion of primary female sex hormones such as estrogen and progesterone. Hormonal contraceptives are available in many different forms such oral contraceptives, transdermal patch, contraceptive coils, and vaginal rings. Hormonal contraceptives primary goal is to prevent pregnancy by inhibiting ovulation, implantation, and fertilization of an egg (Frye). Although the goal does not change, the mechanism and mode for the varies forms do.

Oral contraceptives according to literature are the most widely used method in the United States (Frye). Most oral contraceptives are in the form of combination oral contraceptives containing both estrogen and progesterone and deliver the hormones in a monophasic fashion. The contraceptive effect is achieved by eliciting a negative feedback response on the anterior pituitary that prevents ovulation by inhibiting the release of GnRH from the hypothalamus (Costanzo, Lobo). Estrogen works in the combination by preventing the release of FSH and thus preventing the development of the ovum. In contrast progesterone contributes by thickening the cervical mucus which creates a hostile environment for the sperm to penetrate. Also leads to a decrease in motility in the fallopian tube thus effecting sperm migration which prevents implantation from taking place (Costanzo, Frye).

The transdermal patch prevents pregnancy by using a different mechanism then the oral contraceptive mentioned above. Oral contraceptives enter the body through the blood stream through the digestive system, while transdermal patch administers the hormones through the skin to the bloodstream. The patch administers more estrogen then what is seen in the pill and thus can have more side effects than those seen in the pill (Frye). The patch prevents pregnancy by inhibiting the ovaries from releasing eggs as well as preventing fertilization by thickening the cervical mucus. 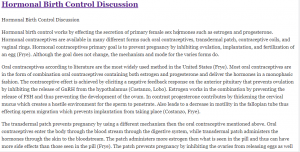 The vaginal ring works mechanistically in the same way as the transdermal patch. The mode of use is different as the hormones are administered through the walls of the vagina. Like both oral contraceptives and transdermal patch, the ring contains a combination of both estrogen and progesterone.

Beyond the need to prevent pregnancy, hormonal birth control can have other health benefits. Benefits such as a decreased incidence of benign breast disease and reduction in ovarian cyst. Women who use hormonal birth control tend to have less painful menstrual cycles. Contraceptives such as oral contraceptives can be used to treat acne, hirsutism, and alopecia because of the anti-androgenic progestogens (Schindler).

I just need you to wria reply 1. Identify any two (2) physiologic concepts that you learned from each thread
2. A constructive critique of the thread – which may include a request for clarification, pointing out errors or adding some new physiologic information from your own research.