What are most important lipids, carbohydrate, or protein?

Which is most important for our health and why?

Can we live a productive life if we drop lipids, carbohydrates, or protein from our lives?

Organic and inorganic compounds are both composed of different elements, organic compounds usually contain hydrogen and carbon in their structure and made within living organisms. Organic molecules have functional groups that are unique for each of them thus creating proteins, carbohydrates, and lipids. All of these compounds are built from very basic units called monomers that are linked together to create larger macromolecules. Metabolism is the only mechanism that is utilized by living organisms via dehydration and hydrolysis. Anabolic reactions are dehydration reactions when two monomers are linked to a larger level, and the catabolic reactions the molecule is hydrolysis by the addition of water molecule and breakdown to the basic units.

They are generally called surges; they contain a large number of carbon and hydrogen with other substances. And are macromolecules with different levels of complexity in the structure. In general, they have a fixed ratio of one carbon: two hydrogens: one oxygen in a chemical formula of C6H12O6. They range from Monosaccharides, Disaccharides, and polysaccharides.

The first level of carbohydrate, three different kinds of monosaccharides are Glucose, Fructose, and Galactose. The three molecules have the same number of carbon, hydrogen, and oxygen. That way they are called isomers with differences in the structure orientation. Glucose is full that can be used by our body cells and allow us to stay alive. All three are produced by autotrophs.

The anabolic reaction between monosaccharides will result in larger compounds linked with glycoside linkages resulted from the dehydration. Three different kinds of disaccharides are:
1. the sugar table sucrose is composed of one glucose and one fructose molecule
2. the second is what makes the milk Lactose which is composed of glucose and galactose
3. the third is Maltose which composed of two molecules of glucose.

Very large macromolecules that result from dehydration of large numbers of monosaccharides, there are two major categories of this level in animals is called glycogen and in plants is called starch. In plants, another level that is very complex known as the Cellulose makes very important structural carbohydrates for plants cell walls and some bacteria. The human digestive system can breakdown all levels of carbohydrates except for cellulose, which is used in our food as fiber, that lubricates and provides health to the colon. Carbohydrates have many functions is living organisms they are the source of energy, they are used for cell walls, they are part of cellular membrane structures such as surface markers

Lipids are generally called fat is another macromolecule that is built via dehydrations from basic units that contain carbon and hydrogen. Lipids have different levels of structures from basic to more complex; they include triglycerides, phospholipids, steroids, and wax. 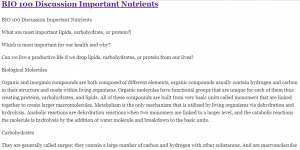 This very important form of lipids that found in the plasma membranes of cells, the membrane is composed of phospholipids with each phosphors part is hydrophilic and the fatty acid tails are hydrophobic.

Another important form of fat with a ring shape structure, functionally it is part of our hormones about 10% of those hormones are made from steroids such as our sex hormones.

When triglycerides are attached to alcohol they create a large complex structure called wax, which is also hydrophobic to water. Fats have several functions in living systems they are part of the cell membrane, structure of sex hormones, insulation in the skin, protection for organs such as the heart, and a source of energy.

Proteins are large macromolecules that are considered very important for living bodies. Proteins are known to be the most diverse of the organic molecules in their structures and functions; changes in the structure of the protein will affect its function.
Protein functions include defense Gamma Globulins for antibody productions, signals such as hormones, enzymes, skin and bone and muscle proteins, in the blood several kinds of proteins in the red blood cells and the plasma proteins. From this, we can see the importance of proteins in our lives. Proteins are built from amino acids, there are 20 different amino acids that can be found in both animals and plants. The amino acids are grouped into essential and nonessential amino acids, essential amino acids are 9 out of the twenty and the non-essential are 11 amino acids, the essential amino acid are required to be part of our diet for protein structure and if they are missing no substation will be allowed, the non-essential one can be replaced by another. The amino acid structure is composed of a central carbon atom, hydrogen, amine group, a carboxyl group, and a variable R unit; the R is different from one amino acid to another.
The dehydration (synthesis) reaction required that the amine group of one amino acid is facing the carboxyl group of the other, this will extract water molecule out resulting in the formation of peptide bond when three amino acids liked this bond is called a dipeptide, but when the number increase we will call it a polypeptide bonds. The formations of proteins are controlled by the DAN and the RNA via transcription and translation and have different levels, the primary, secondary, tertiary, and quaternary levels.

This the first level of protein synthesis, the amino acids are oriented amine to carboxyl and peptide is established, when many of them happened this is known as the primary protein structure, the only attractions between the amino acids are the peptide bonds. The primary level is the most important because it will determine the final protein structure, an example of this level of proteins is the enzymes.

The primary protein is twisted into what is known as the alpha helix twist, this twist bring amino acids are closer to each other promoting more attractions between them in what is known as hydrogen attraction, this creates numbers of attractions make the proteins more stable and used for more functions, an example of this level is the alpha keratin protein that makes our skin waterproof and makes our hair and nails.

The third level of protein structure, when the alpha helix is twisted one more time in what is called the beta plate sheet formations, will cause the sulfur unites in the proteins to interact with each other’s resulting in covalent bonds known as the disulfide bridges which make the protein more stable. The third protein structure can be found in the muscular tissue.

At this level the protein is not only composed of amino acids alone, other elements are added to the tertiary level to make it more stable and functional, this can be detected in the red blood cells when hem units are added to create hemoglobin molecules, and in the thyroid hormones when Iodine is added to build thyroxin.

Nucleotides are composed of carbon, phosphate, and nitrogen bases the Adenine, Guanin, Cytosine, and Thymine, and the ATP molecule that is used for energy. They are organized into two highly important molecules Deoxyribonucleic acid (DNA) and Ribonucleic acid (RNA) both will be discussed in future units in more detail.